Fashion stylists have become a very important figure in the celebrities. Behind each of their looks there are many hours of work, both in relations with brands and wardrobe tests, and of course in analyzing the event to which your client goes to decide what exactly will be how he will dress. An arduous responsibility of stylists, one of the most demanded professions nowadays.

Over the years those responsible for dressing a known face and place it among the most elegant has gone to more, and Social Networks have had much to do in this, since through them are shown to the world the. looks finals. But this goes back to the nineteenth century with the French Rose Bertinthe style advisor of the Queen Marie Antoinette, the first stylist in history.

The industry is in a fabulous moment, that’s why we make you a selection of the most important stylists in Hollywood, the ones in charge of dressing the royals and first ladies, and those who made history by dressing up celebrities Iconic celebrities. Names worth knowing for fashion lovers.

Petra Flannery is one of the most famous stylists in Hollywood. Her daring style on the red carpet has made her one of the most prestigious stylists. Emma Stone, Zoe Saldana, Amy Adams, Daisy Ridley or Claire Danes. are some of her most prominent clients.

Kate Young dresses many of the most important actresses such as Sienna Miller, Selena Gomez, Margot Robbie or Natalie Portman. Kate started as Anne Wintour’s assistant and then she has become one of the most powerful stylists in Hollywood. And not only this, she also works as a stylist for covers, fashion shows and advertising campaigns.

Leslie Fremar, whose mentor is none other than Anna Wintour, is another of Hollywood’s most influential stylists. Charlize Theron, Kate Winslet, Taylor Hill, Reese Witherspoon, Julianne Moore, Jennifer Connelly or Scarlett Johansson. are some of her clients, who are always on the list of the most successful of the red carpet. Being Wintour’s assistant she met actress Salma Hayek, who asked her for advice for the red carpet of the 2003 Cannes Film Festival. From that moment on, the actress introduced him to many more actress friends of whom he is now her stylist.

Mimi Cuttrell is one of the most outstanding stylists of the moment. Her friendship first, and later relationship with Gigi Hadid, have made this Californian one of the top stylists. She has had and still has the ability to stay ahead of the trends and we see it every day in Hadid, who has made us fall in love with her daily looks. Thanks to her we’ve also seen the style evolution of Priyanka Chopra. She also dresses Ariana Grande.

Elizabeth Sulcer is the stylist for Kaia Gerber, Bella Hadid, Elsa Hosk, Stella Maxwell, Romee Strijd or Taylor Hill, And she is also one of the trendsetters. The former Alexander McQueen apprentice is another of the powerhouses of the moment, whose key to success is to combine her personal style with the glamour of old Hollywood and the look of the 90s. Photographers Helmut Newton and Richard Avedon are his inspiration.

Elizabeth Stewart is one of the most recognized stylists in Hollywood. She transitioned from journalism to styling with Calista Flockhart, her first client. From then on, names like Julia Roberts, Sandra Bullock, Jessica Chastain, Freida Pinto, Viola Davis, Gal Gadot or Amanda Seyfried. and of course his favourite client: Cate Blanchett, one of the most elegant actresses of all time.

Samantha McMillen has dressed virtually all of Hollywood, from Julia Roberts to Nicole Kidman to Angelica Houston. She was Karl Lagerfeld’s favorite stylist and has been in charge of the stylistic leap of Elle Fanning. Her success lies in changing her client’s image in just a few hours. Brie Larson, Ryan Gosling, Ashton Kutcher, Colin Firth or Chris Hemsworth. are also among his clients.

Lady Gaga is a true diva, not only for her music, but also for her red carpet looks. Behind this magnificent work are Tom Eerebout and Sandra Amador, who consistently place her among the best dressed with bold, eye-catching creations. This stylist duo were number 1 on The Hollywood Reporter’s 2019 annual list.

Previously, Brandon Maxwell did his work with the singer, as we saw the passing of his looks extravagant to elegant. In fact he was responsible for the actress’s Marilyn-esque styling when she picked up her first Golden Globe.

Julia Von Boehm is Nikole Kidman’s stylist. She belongs to that group that is able to access the creation and jewelry she needs, as her contacts are the best in the world. The exclusivity undoubtedly makes her one of the best, and although she only works for the actress, she is also a fashion editor in different fashion magazines.

Rachel Zoe has been one of the best known stylists for having among her clients very well known actresses in Hollywood: Demi Moore, Anne Hathaway, Eva Mendes, Liv Taylor, the Olssen sisters… are a few of them, always among the most elegant in the red carpet. Rachel went from stylist to celebrity and for years an entrepreneur with her own clothing brand.

Rob Zangardi & Mariel Haenn are JLo’s stylists since 2011. They are the ones in charge of everything related to her wardrobe and getting those looks so incredible and unforgettable that the actress leaves us. Camila Cabello, Gwen Stefani, Rachel McAdams or Cara Delevingne are some of her other clients.

Veneda Carter is Kim Kardashian’s new stylist. since a few months ago. A 28-year-old former model as a teenager, she has been in charge of Kardashian’s radical makeover. She was responsible for the famous look Christmas super heroine look.

Zendaya is one of the most stylish actresses of the moment. All her looks cause a sensation, and she is responsible for it. Law Roach, one of Hollywood’s most renowned stylists. Law can boast of always placing the actress in the lists of the best dressed. 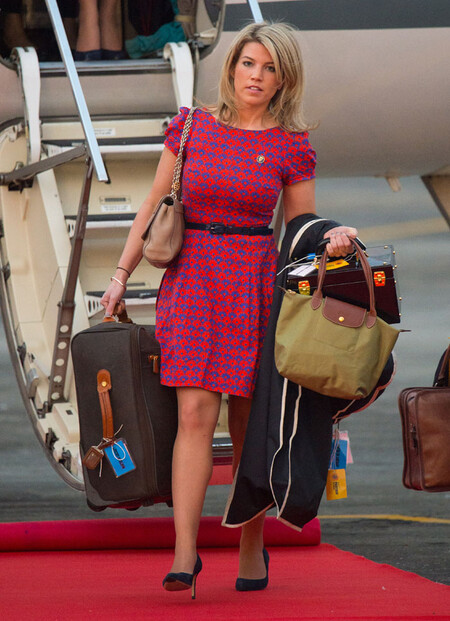 Meredith Koop has dressed Michelle Obama for more than eight years, but has always remained in the shadows. The stylist for the former first lady of the United States worked on her boutique She took her to the White House and made her her stylist. Koop took risks and won with designers and firms very different from the usual ones, of different levels of notoriety and with groundbreaking designs.

Hervé Pierre has been the stylist of Melania Trump. Yes, the designer, who has also worked for brands like Balmain, Oscar de la Renta and Carolina Herrera, began as one of her head couturiers but over time the relationship between the two has gone far beyond that of couturier and client, he became her stylist.

Eva Fernández has been the Queen’s stylist since 2015. Her arrival at the palace meant a change, for the better, in Doña Letizia’s style. Looks more modern, fresher, and best of all, the inclusion of new firms in your dressing room, including the brands low cost. Eva, who worked for Cosmopolitan magazine, met the Queen in a fashion showroom. It seems that Her Majesty ” had a “crush” on her stylist that lasts to this day.

Natasha Archer is the stylist who has turned Kate Middleton into one of the world’s royals most stylish. She started out as the Duchess of Cambridge’s personal assistant but eventually became her stylist in 2014. Despite Kate’s classic style, Natasha has rejuvenated her wardrobe. The high-end labels combined with the brands. online, have made Kate one of the royals more sophisticated always betting on looks flawless.

Marie-Jeanne Rose Bertin we could say that she was the first stylist in history. She started as a dressmaker with her own shop in Paris, then Marie-Antoinette noticed her and started to make alterations and later designs for her. Her name became so famous that she became the essential designer of the Parisian society of the XVIII century, but when Marie Antoinette became queen, Rose became her fashion advisor, Marie Antoinette defined her as her ministre des modes (minister of fashion).

Hubert de Givenchy became the designer of choice for many celebrities, and Audrey Hepburn’s stylist. The Frenchman rose to fame in the 50s for creating the eponymous firm and dresses Hepburn o Jackie Kennedy. The actress and the designer had a love at first sight. From the moment she met him she chose him for the costumes of Sabrina or for the wedding dress for second wedding, for being a Novelty, youthful and exciting designer.

Oleg Cassini was a designer descended from Russian and Italian aristocrats who ended up as Jacqueline Kennedy’s stylist. He began designing dresses for her that have become iconic, classic and refined designs, demonstrating American good taste, but it was in 1961 that he Jackie Kennedy appointed him “secretary of style.” Before she came to the White House hat designer Marita O’Connor. became his style and shopping assistant until 1961. In fact Marita designed the hat pill-box which she wore at the inauguration of her husband’s presidency.

Anna Harvey was Princess Diana’s stylist. Anna was an editor at Vogue UK, who after meeting Lady Di, became a friend and her stylist. She was in charge of changing her looks and turning her into a style icon. At first she avoided luxury brands to avoid competing with the other royals of the family, but over the years everyone wanted to dress her. And she introduced her to different designers like Jan Van Velden, Murray Arbeid, Jasper Conran and Caroline Charles who created designs to remember forever. And she always combined affordable brands with luxury ones, another of her successes in those days.

Two Subdued sweatshirts with which you can go beyond the Beverly Hills viral sweatshirt that everyone has and be more original than any of your friends.